The current IHE ITI approach to asynchronous message exchange, as described in the Asynchronous Web Services Exchange Supplement, makes use of the WS-Addressing specification to handle a delayed response. The approaches discussed here are based on more detailed understanding and feedback from implementers with similar requirements that the Asynchronous Web Services Exchange Supplement was designed to address.

When two actors, referred to as Requestor and Provider, need to exchange web services based messages using a request-response message exchange pattern, they can do so synchronously or asynchronously.

With synchronous message exchange, the Requestor sends a request and the transport layer code blocks waiting for a response from the Provider. The Requestor receives the response on the same HTTP connection that the Requestor initially established to send the request. Synchronous exchange is usually easier to implement and requires that the Provider be able to generate a response in a short time, specifically in a time less than the HTTP timeout value.

With asynchronous message exchange, the Requestor is able to release transport specific resources once the request is acknowledged by the responder, knowing that a response will eventually be received. When the Provider completes the processing of the message it sends a response back to the Requestor over a new HTTP connection. Asynchronous message exchange enables support for network infrastructures where avariable or high communication latency is present.

There are several different approaches to implementing asynchronous message exchange, depending on the needs of the application and business environment. Figure 2.2-1 illustrates these patterns.

The above three approaches, along with default synchronous messaging, are presented in Figure 2.2-1, showing the messages traveling to and from the application and Web Services Stack layers. 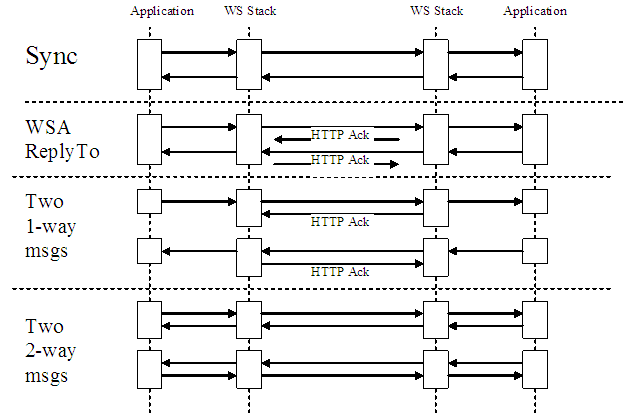 IHE has enabled some of these approaches to asynchronous messaging.

Two 1-way messages: IHE has not enabled the use of two 1-way messages because at this time it is felt that the overhead of profiling this mechanism is not worth the benefits it provides because it does not carry an application level acknowledgement.

Deferred Response addresses the specific requirements for an application layer acknowledgement of the request message and/or the response is expected to be substantially delayed. Because of the specific requirements to have an application level acknowledgement, which can only be supported by two 2-way messaging, IHE has been evaluating the use of Deferred Response in transactions where its capabilities seem most necessary. The Deferred Response approach is specifically enabled in HL7 V3 and so an option for this has been added to the Cross Gateway Patient Discovery transaction in the XCPD profile. This transaction uses the underlying capabilities of HL7 V3 to enable Deferred Response and describes an option on the actors which declare this capability. 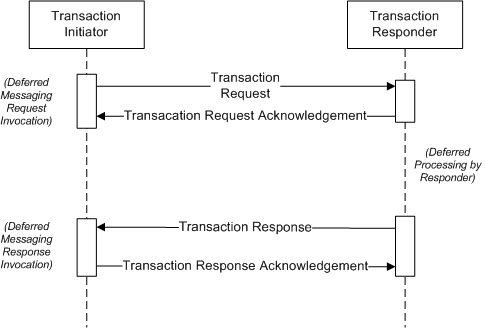 For a particular IHE transaction to enable support for Deferred Response it must specify the following extra requirements:

As of this writing only XCPD has defined the use of Deferred Response, but it could be applied to several other profile's transactions. When such need is clearly identified further work will be considered.

Status of application of Deferred REsponse