The Aggregate Data Exchange (ADX) Profile supports interoperable public health reporting of aggregate health data. These most typically take the form of routine reports (weekly, monthly, quarterly etc.) from a health facility to some administrative jurisdiction such as a health district, though there are numerous other use cases such as international reporting and community health worker reporting.

The motivating context for this profile originates in health systems management in developing countries though its potential use is not restricted to these environments. What are collectively called developing countries are very diverse environments. Information systems need to be able to scale and adapt across diverse and changing conditions. Electronic medical record systems (EMR) penetration is often limited (but also often growing) leading to varied and mixed modes of data collection and transmission. ADX Profile provides a formal specification to guide the generation and exchange of aggregate data from these systems.

The primary benefit of ADX is that it allows jurisdictions to formally define and publish routine report definitions. Users of ADX are then able to produce and consume ADX messages which can be validated according to the published definitions. The ADX data format is relatively simple, unemcumbered and extensible making it easy to implement in a range of different systems.

The Aggregate Data Exchange (ADX) Profile enables reporting of aggregate health data tuples. ADX will typically be used to represent these data tuples for numerators and denominators which can be used in the construction of public health indicators. These tuples are sets of values which are keyed according to a data element subject, a temporal dimension, and a spatial dimension.

An example of a data tuple is the number of live births recorded in January 2017 at Nyamandhlovu Clinic.

The ADX specification does not define the semantic content of the routine reports. Rather it provides a mechanism by which jurisdictions can define reports using SDMX data structure definitions. Producers and consumers of ADX data messages make use of these definitions to validate and constrain the content. This relationship is illustrated in the diagram below: 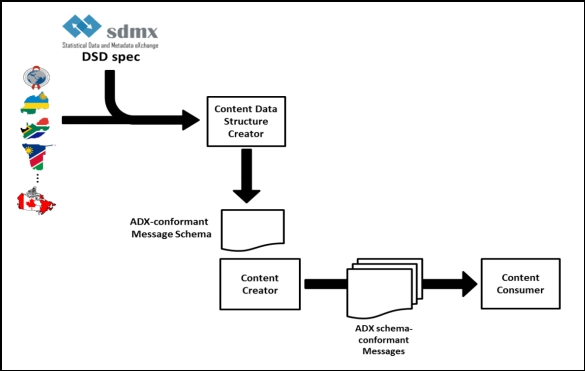 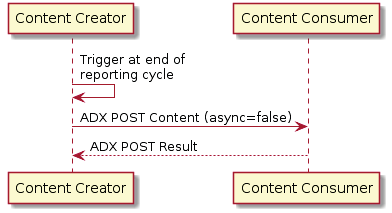